I'm Phoebe Zimmerman. And I'm Steve Ember with the VOA Special English program PEOPLE IN AMERICA. Today, we tell about Irving Berlin. He wrote the words and music for some of the most popular songs of the twentieth century.
Irving Berlin lived to be one hundred one years old. He died in nineteen eighty-nine. During his long life, he wrote more than one thousand songs. Many of his songs have become timeless additions to America's popular culture.
Irving Berlin's music helped spread that popular culture throughout the world. Berlin was born in Russia. But he captured the feeling, the people and the customs of his new country. And he put those ideas to music.
Another composer, Jerome Kern, once said of Irving Berlin: "He has no place in American music. He IS American music."
Most American children grow up hearing and singing some of Irving Berlin's songs. Two of the best known are linked to Christian religious holidays. They are "White Christmas" and "Easter Parade."
Many Americans think the perfect Christmas Day on December twenty-fifth should be cold and snowy. Irving Berlin thought so, too. He wrote "White Christmas" in nineteen thirty-nine. It was sung in the movie "Holiday Inn" in nineteen forty-two. "White Christmas" became one of the best-selling songs of all time. Here is Bing Crosby singing his famous version of "White Christmas."
lrving Berlin's song for the Easter holiday captures another American tradition. "Easter Parade" is about a tradition in New York City. There, on Easter morning, people walk up and down Fifth Avenue after church services to enjoy the spring weather. Women wear new hats and dresses. Berlin wrote the song for a musical play in nineteen thirty-three. It was the main song in the musical film "Easter Parade" in nineteen forty-eight. Here is Judy Garland singing "Easter Parade."
Irving Berlin was born Israel Baline in eighteen eighty-eight in the Russian village of Temun. He was the youngest of eight children. His family was Jewish. They fled Russia because of religious oppression.
The Baline family came to America in eighteen ninety-three. They did not have much money. They moved into an area of New York City where many other poor Jewish immigrants had settled when they moved to the United States. Israel's father died when the boy was eight years old. The young boy left his home to find work. First, he got a job helping a blind street singer. Then he began earning money by singing on the streets of New York. Later, he got a job singing while serving people their food in a restaurant. Israel taught himself to play the piano. But he could play only the black keys.
Soon Israel began writing his own songs. He never learned to read or write music. He wrote his songs by playing the notes with one finger on the piano. An assistant wrote down the notes on sheets of paper. When the songwriter's first song was published, his name was spelled wrong. Israel Baline had become I. Berlin. Israel thought the name sounded more American. So he renamed himself Irving Berlin. 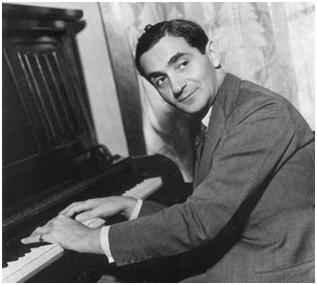 Between nineteen twelve and nineteen sixteen, Irving Berlin wrote more than one hundred eighty songs. By the time he was in his late twenties, his songs were famous around the world.
Berlin became an American citizen in nineteen eighteen. A few months later, he was ordered into military service. The United States was fighting in World War One. Berlin was asked to write songs for a musical about life in the military. He called the show "Yip Yip Yaphank." All of the performers in the show were soldiers. Many of the songs became popular.
After he served in the army, Berlin returned to New York. He formed his own music publishing company. He also established a theater for his musical shows near Broadway.
Irving Berlin loved America for giving a poor immigrant a chance to succeed. He expressed his thanks for this success in his songs. One of these songs is "God Bless America." He wrote the song in nineteen eighteen. But it did not become popular until Kate Smith sang it in nineteen thirty-nine. She sang the song to celebrate Armistice Day, the anniversary of the end of World War One. Many people feel "God Bless America" is the unofficial national song of the United States.
Berlin gave all money he earned from "God Bless America" to the Boy Scouts and Girl Scouts of America. Here is Kate Smith singing "God Bless America."
The United States entered World War Two in nineteen forty-one. Berlin agreed to write and produce a musical show called "This is the Army." It was a musical about life in the military. All the performers were soldiers.
The show was performed in many cities across the United States. It helped increase support for America's part in the war. It earned ten million dollars for the Army Emergency Relief Fund. "This is the Army" also was performed for the American troops at military bases around the world. Irving Berlin appeared in most of these performances. He sang the song he had written earlier. The song is about what he had hated most about being in the army. Here, Irving Berlin sings "Oh, How I Hate to Get Up in the Morning."
After the war, Berlin continued to write songs for movies and plays. He wrote songs for more than fifteen movies from the nineteen thirties to the nineteen fifties. Many of the songs were used in movies starring the famous dancers Fred Astaire and Ginger Rogers. Here is Fred Astaire singing a song that appeared in several movies, "Puttin' on the Ritz."
Irving Berlin also wrote the music for seventeen Broadway plays from the nineteen twenties to nineteen fifty. His most successful Broadway musical was "Annie Get Your Gun" in nineteen forty-six. Irving Berlin retire nineteen sixty-­two after his last Broadway musical, "Mister President," failed. He died in nineteen eighty-nine. But the songs that he gave America will be played and sung for many years to come.