This is Scientific American — 60-Second Science. I'm Steve Mirsky.
"I think if genome sequencing gets just gets super cheap then it's... probably very soon going to ma﻿ke sense to just sequence all your DNA." Science journalist Carl Zimmer, author of the book She Has Her Mother's Laugh: The Powers, Perversions and Potential of Heredity. Zimmer spoke last month at New York University's Journalism Institute. Right now, commercial genome services only look at a small percentage of all your DNA. But as the cost plummets, you'll get your entire genome. 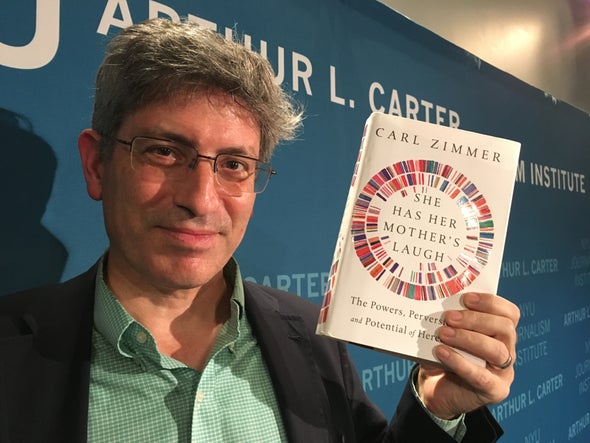 "Then the issue will become, well, what do you use your genome for in terms of your health. A lot of people will actually benefit from something I learned by looking at my genome, which is, that if God forbid I were to get hepatitis there are certain drugs that won't do me any good. Because I have certain genes. Pharmacogenomics, as it's called. I think that pharmacogenomics might be kind of the low-hanging fruit of genome sequencing. Because, doctors so often, if you get sick, they're like, well, let's try this. It might be hepatitis, it might be depression, all sorts of things, like, well, that didn't work very well, let's try this. Wouldn't it be nice if we could just skip the stuff that doesn't work and go to the stuff that does? So that might be kind of where medicine goes in terms of using our genomes and understanding how heredity affects your health."
For Scientific American — 60-Second Science. I'm Steve Mirsky.