Hello! This is the VOA Learning English program, Words and Their Stories.

On this weekly program, we explore the origin and usage of common expressions in American English.

For example, sometimes when Americans do not understand something they say, 'It's all Greek to me."

This saying does not make sense, of course, if you actually speak Greek. But today, we are going to talk about a Greek word and what it means in American English.

"Eureka!" is Greek for "I have found it!" It is something we say when we have figured out a solution to a complex problem. 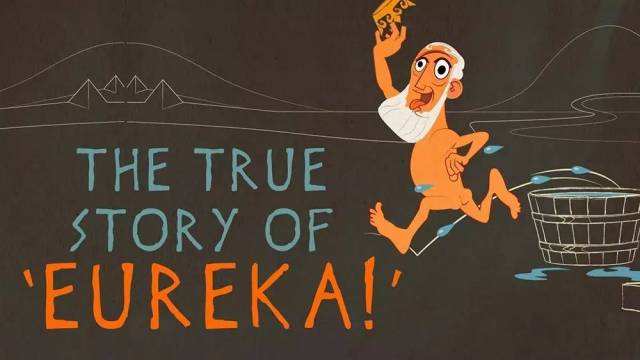 "Eureka" is a kind of interjection. Interjections are the quick, short words or sounds we cry out when we are feeling intense emotion. They can express pain, surprise, anger or joy. These kinds of words also are called exclamations.

Someone cries "Eureka" to express excitement when that person makes a discovery. When you finally find the answer to something you have been working on for a long time, nobody would blame for yelling "eureka!" from the rooftops.

The story behind "Eureka," however, is somewhat of a guess.

Some say it goes all the way back to the time of ancient Greece and an inventor named Archimedes (c. 287-212 B.C.E.). The king of Syracuse, Heiro II, gave Archimedes a difficult problem to solve. The king wanted to know if goldsmiths had used pure gold to make his crown.

This problem troubled Archimedes. How could he learn if the crown was pure gold?

One day, he stepped into the water of a bathtub. He saw that the water flowed over the top of the tub. The water that overflowed was displaced by his body.

Suddenly, Archimedes realized how he could test the gold in the king's crown. He knew that gold is heavier than silver. So, he reasoned that a crown mixed with silver would have to be bulkier than one made only of gold if both weighed the same. Therefore, it would displace more water than a crown of pure gold.

Archimedes, allegedly, became so excited by this discovery that he jumped out of the bath and ran naked through the city streets, shouting: "Eureka! Eureka!" meaning, "I have found it! I have found it!"

In another version of the story, the king gives a different puzzle to Archimedes to solve. Archimedes must figure out how to build a massive ship that won't sink. Again, he supposedly makes his discovery in a public bath.

Both are great stories, but most likely, Archimedes never said "Eureka!" And who knows if he really ran through the streets naked.

What we do know is that Archimedes discovered the law or buoyancy, or what engineers still call today, the Archimedes principle.

But let's go back to "eureka" as an expression.

"Eureka!" has another historic connection to gold.

This time it happened during more modern times in the United States. During the California gold rush, prospectors looking for gold in the Californian hills were said to yell "Eureka! I found it!" when they struck gold. To this day, California's state motto is Eureka!

The word "Eureka!" also lives on in scientific communities. The American Association for the Advancement of Science calls its breaking scientific news site EurekAlert.

However, these days, saying "Eureka!" as a way of expressing an amazing discovery is out of style.

One interjection that has replaced "eureka" is "a-ha!" But both "eureka moments" and "a-ha moments" are used to describe the times we are experiencing a breakthrough discovery.

Albert Einstein arriving at his theory of relativity and Isaak Newton getting hit on the head with an apple are both examples of eureka moments.

Here is how to use it in everyday conversation.

If your classmate or work colleague seems to be about to discover something big and important, others might warn you to stay away. "Don't bother her. She's having a Eureka moment."

When a character in comics or in an animated film has a really great idea, sometimes a lightbulb appears above their head. So, saying "lightbulb" is a funny way of saying, "I just had a brilliant idea!"

And that brings us to the end of another Words and Their Stories. Hey, I know ... lightbulb! If you have a eureka moment, you can share it in the Comments Section!